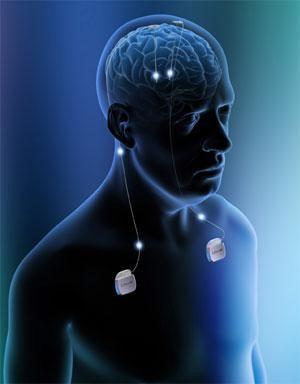 DBS has been approved by the Food and Drug Administration as a treatment for Essential Tremor and Parkinson’s disease (PD) since 1997. DBS was approved for dystonia in 2003, Obsessive–Compulsive Disorder (OCD) in 2009, and Epilepsy in 2018. DBS has been studied in clinical trials as a potential treatment for chronic pain for various affective disorders, including major depression.

At INI, we utilize DBS to treat Parkinson’s and Essential Tremor on a regular basis. The procedure is done in two stages, performed on the same day. First stage is performed awake, and an electrode is introduced into the depth of the brain. The patient is then checked for effectiveness of stimulation while awake. The second stage is performed while the patient is under general anesthesia (fully asleep) and the brain electrode is attached to a battery by an extension cord. Our center was the subject of a Univision two-part national story regarding Deep Brain Stimulation, which can be viewed here: Part One and Part Two.