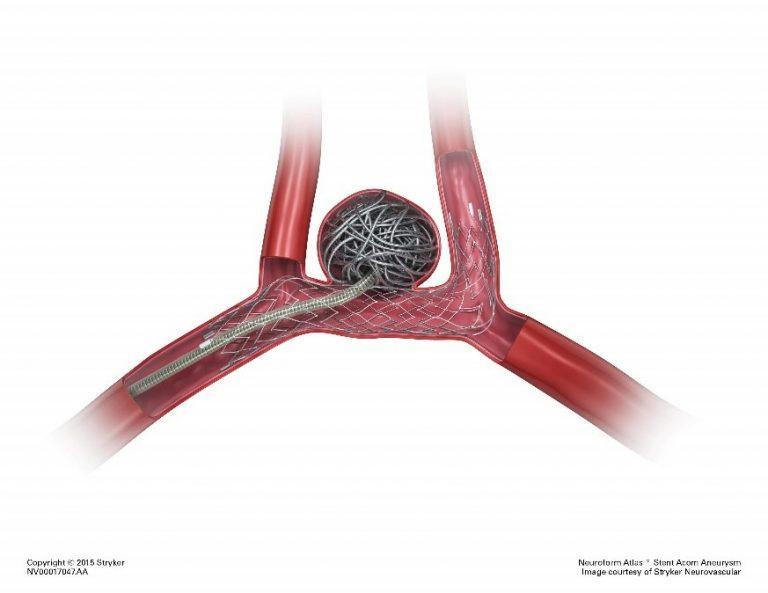 Cerebral aneurysms, also known as brain aneurysms, are an abnormal outpouching of blood vessel walls in the brain causing a dilation that looks like a “sac” off of the parent blood vessel.  A brain aneurysm is typically unnoticed unless it is very large and pressing on nerves in the brain resulting in symptoms (such as the inability to move the eye) or it can be fatal should the aneurysm rupture.

When the brain aneurysm ruptures the patient experiences the worst headache of their lives, it is often described as a “thunderclap” headache.  Other symptoms include fainting, loss of consciousness, sensitivity to light, stiff neck, nausea, vomiting, etc.

Traditionally brain aneurysms have been treated by applying a metal clip at the base of the aneurysm separating it from the blood vessel feeding the aneurysm.  This prevents the aneurysm from getting bigger, blowing up like a balloon, and ultimately rupturing/“popping”.

Many times, brain aneurysms are found, incidentally (accidentally), during other work-ups such as migraines, eye problems, car accidents, head trauma, or family history.

The experts at INI offer this ground-breaking technology for the treatment of brain aneurysms.